Just upriver from Bartram’s Garden (Botany in Early Philadelphia (pt. 1): Bartram’s Garden – Alligators, American Plants and a Riverside Trail) is the home of William Hamilton, another important figure in early American botany. Unlike Bartram, who was exporting American plants to Europe, Hamilton was a wealthy collector, importing plants from around the world for his estate- which Thomas Jefferson called “the only rival I have known in America to what may be seen in England.”  Born into the wealthy Hamilton family (not THAT Hamilton – William’s grandfather was lawyer Andrew Hamilton, whose successful 1735 defense of printer John Peter Zenger established early American freedom of the press by successfully using truth as a defense for an accusation of libel). Hamilton built his first mansion on the property in 1770, but it was the influence of the Adams-style architecture he saw in London during a trip in 1780’s that prompted him to add on and modify his existing home (Hamilton was a definite Anglophile – his Loyalist leanings got him tried for treason during the war, although he was acquitted and allowed to retain his property). Considered the first true neoclassical/Adams-style mansion in America, you can tour the house on  Thursdays (April-October) and the second Saturday of the month.

The paint and wallpaper are long gone from the house, but the architectural details remain:

The interior of the house is so plain and unadorned today and Adams’ decorative style was so over the top, so it’s interesting to imagine what it once may have looked like. This example is a Adams decorated room from one of the historic rooms at the Philadelphia Museum of Art (Lansdowne house, 1766-75): 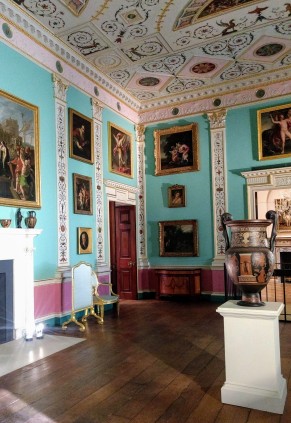 Gardening was Hamilton’s passion and people came from all over to admire his English landscape designs. He fed his passion with his wealth, importing plants from all over the world, and is credited with introducing many plants to America, including: the red rose, blue hydrangea, tree of heaven and ginko.

His gardens are gone now, but you can still see one of the ginkgos he shared with his friend Bartram (now the oldest ginko in America) at Bartram’s Garden. Hamilton’s greenhouse was a hundred forty feet long and filled with over 10,000 plants.

Hamilton had no children, so after the death of his niece the house was sold to the Woodlands Cemetery Company, who established Victorian cemetery on the grounds- and used the home as a funeral parlor. Recently unearthed photographs show the drawing room during this phase. The museum hopes to eventually recreate the space.

Woodlands got a boost in the public eye in 2013, when Elizabeth Gilbert (of “Eat, Pray, Love” fame) used it as the home her heroine in “The Signature of All Things.” Several of the spaces mentioned in the book, including the binding closet, servants quarters, and stables are still visible.

You can wander the cemetery today to view the beautiful Victorian monuments, including the resting spots of Samuel Gross (the Philadelphia surgeon immortalized by painter Thomas Eakins) and Eakins himself. The cemetery is known for its proliferation of “cradle” graves, many of which are maintained by a group of volunteers that plant them with plants common in Victorian Philadelphia.

The grounds are free to visit, and make a beautiful picnic spot. To continue the Victorian theme, you can drive a mile or so up Baltimore Avenue and walk around the area, which is filled with gorgeous Victorian row homes.

We like to stop for lunch at “Mood Cafe,” which, despite the name, is a small Indian Cafe serving a huge variety of lassi (over a hundred and fifty types!) and chaat. Our favorites are the ginger lassi and the chicken tikka chat, but the super friendly owner is happy to customize to your taste.

Another tasty stop on Baltimore Avenue is Fu-Wah Mini-Market for their yummy Banh Mi – we recommend the tofu or grilled pork.  There is no seating, so take your sandwiches to the cemetery for a picnic or down the street to Clark Park (where you can say “hi” to Charles Dickens).