In her book “Founding Mothers,” Cokie Roberts explores the contributions of women to the American Revolution.  These women were not just daughters, wives, and mothers – many made significant (and overlooked) contributions to the war effort.  After reading the book as part of our homeschool history curriculum this year, I set out to track down links to these women that still exist in today’s Philadelphia. We hear so much about the great men of the era as we wander the city, but the women are much harder to track down.  Here are the sites I found that relate to the Founding Mothers discussed in Roberts’s book.  These can be linked on a ~3 mile walk around Old City:

The President’s House Site: This is a great place to start because

the house/s on this site have strong ties to several of the Founding Mothers. Originally the property of the Penn family, General Howe used this house as his headquarters (and love nest) during the British occupation of Philadelphia in 1777-78. Roberts quotes a popular ditty of the day, describing why Howe may have stayed cozy in Philadelphia instead of pursuing Washington’s troops to Valley Forge:

Sir William, he, snug as a flea,

Lay all the time a-snoring;

Nor dreamed of harm, as he lay warm

(Elizabeth Loring was the wife of one of Howe’s American loyalist officers). After the British left, Benedict Arnold moved in (during his time serving as Military Commander of the city) and it was while living here that the met and married Peggy Shippen, daughter of a local family with loyalist ties- who is responsible for introducing Arnold to the British spy-master Major Andre, and acting as the link between the two men (Benedict Arnold & Treason in Philadelphia). From 1780-1790, it was the home of Robert and Mary Morris (“Financier of the Revolution”), who lived here while Robert served as Supervisor of Finance under the Articles of Confederation.  George Washington stayed here with Mary and Robert while serving as President of the Constitutional Convention.  Later, Morris sold the house to the federal government and it became the official President’s House, home of Martha Washington during George’s two terms and Abigail Adams from 1797-1800.  Today, the site is interpreted with information relating to slavery in Philadelphia during the time of the Washingtons’ occupation (The Footprints of a Runaway Slave – George Washington & Slavery in Philadelphia).

A few blocks away is Christ Church, where Deborah married her loser of a first husband, John Rogers.  At Christ Church, you can sit in the pews used by George & Martha Washington and Robert & Mary Morris. You can also visit Robert and Mary, who are buried in the White family vault in the churchyard (Bishop William White was Mary’s brother) (The Colonial (Georgian) Churches of Philadelphia).

This former bank, run by the

park service, houses a collection of portraits by Charles Wilson Peale, who painted most the famous men (and a few women) of the day for his museum.  Included in the collection are these portraits of  Mary Morris and Martha Washington (Putting Faces to the Revolution: The Portrait Gallery at Independence Park).

Franklin Court: So many connections to Deborah Franklin

here (also her daughter, Sarah Franklin Bache).  It was along Market Street that Deborah first glimpsed Ben – walking down the street eating a loaf of bread with two others tucked under his arm and his pockets stuffed full of clothing.  From Market Street, you enter through the same passageway that the Ben would have used to access his house and print shop.  This is the location of the house that Deborah built with Ben’s “advice,”  while he was living in London.  After her death, Benjamin lived here with his daughter, Sarah. You can see quotes from their letters inscribed on the ground, along with archaeological fragments of the house (Ben Franklin’s Ghost House), including the privy pit (Ben Franklin’s Toilet).  This is also the location of the print shop of Ben and Deborah’s grandson, Benjamin Franklin Bache. Just outside Franklin Court, in buildings owned by Franklin, the Park Service operates a post office (get a postcard cancelled with a “B Free” stamp) and a re-created print shop, where you can see a reproduction colonial-era printing press in action. Deborah managed Ben’s business while he was away – including his print shops and the postal service.

Welcome Park: This is the site of the Slate Roof House that William and Hannah Penn (Penn’s second wife) occupied in 1699 while they waited for the house on their estate up-river to be finished.

Hannah gave birth to her first child while living here.  Hannah is not mentioned in Roberts’s book (which focuses on women during the Revolution era), but she was quite influential. Although she returned to England in 1701, she handled the business of the colony for 6 years after William’s stroke in 1712.  After William’s death in 1718,  she inherited the proprietorship and ran the colony until her death in 1726 (although she had to fight a court battle with the son from William’s first marriage to retain ownership).

Home Site of Alexander and Betsy Hamilton: This house, just around the corner from his First Bank of the United States, is where the Hamiltons lived from 1790-1795 while Alexander served as Secretary of the Treasury. It was while living here that he began his affair with Maria Reynolds.

Before she married James Madison and became Dolly Madison, Dolly was married to Philadelphia lawyer John Todd. They rented this house from 1791 until his death during the Yellow Fever outbreak of 1793. John’s brother was executor of the estate (a role prohibited to women) and was reluctant to give Dolly her inheritance (even threatening to take away Dolly’s son).  She had to sue to get her inheritance, and it is speculated that one reason she was eager to remarry was to retain custody of her son. The limited rights of women during the time is mentioned throughout the book. Built in 1775, today it is decorated to reflect the lifestyle of a colonial, middle class lawyer. The house is owned by the park service and tours are offered seasonally (free, timed tickets required).

Powel House: In contrast to the middle class home of the Todds, the Powels were Philadelphia elite and Eliza Powel was a lavish hostess, entertaining many of the founding fathers (and mothers) in her home – including hosting a ball to celebrate George and Martha Washington’s 20th wedding anniversary. John Adams wrote to Abigail of his enjoyment of one “most sinful feast” consisting of “everything which could delight the eye or allure the taste, curds & creams, jellies, sweetmeats of various sorts, twenty sorts of trifles, tarts…”  It was Eliza who asked Franklin what kind of government the constitutional convention had come up with and was told “A republic, if you can keep it.” She is also credited with convincing George Washington that the fate of the new nation depended on his running for a second presidential term. Well read in politics, education, and medicine, Benjamin Rush dedicated his book “Thoughts Upon Female Education” to her. After being sold off, much of the original interior architecture was later returned. Today, the original front parlor can be viewed at the Philadelphia Museum of Art (along with furnishings and portraits from the Philadelphia home of the wealthy Cadwalader family). The house is open for tours seasonally. 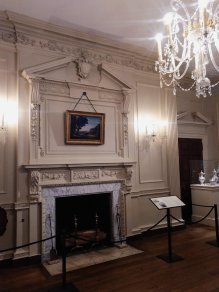 Note: No tie to a founding mother, but across the street from the Powel House is a marker commemorating the site of the print shop where Thomas Paine’s “Common Sense” was first published.

St. Peter’s: The interior of the this church has had very little renovation, so it looks like it did back in the colonial era when wealthy families such as the Powels (and their guests George and Martha Washington) worshiped here.  You can sit in the box used by the Powels and visit the grave of Eliza Pinckney, who is buried in the graveyard. Although Eliza’s story mostly takes place in South Carolina (where this spunky lady took over the running of her family’s plantation at age 15 and was responsible for introducing indigo to the colonies), it ends here in Philadelphia – where she came to get treatment for breast cancer. George Washington was a pall bearer at her funeral (The Colonial (Georgian) Churches of Philadelphia).

This c. 1750’s house was the home of Peggy Shippen’s uncle, Dr. William Shippen, who was in charge of medical services for the Continental Army and served in the Continental Congress from 1778-9.  The house is privately owned, so can only be viewed from the outside.  Peggy’s family home is no longer standing, but was located on the same block.

2 thoughts on “Founding Mothers in Philadelphia”