The museum houses an incredible collection, including the only surviving copy of Benjamin Franklin’s ﬁrst Poor Richard Almanac (which we got to handle!), presentation copies of books by Herman Melville (housed in a bookcase that once belonged to him), the ﬁrst edition of Don Quixote (Dr. Rosenbach’s favorite book), the manuscript of James Joyce’s Ulysses, two 15th-century manuscripts of Chaucer’s Canterbury Tales, the largest extant collection of Robert Burns’s letters, manuscripts, and early editions, one of the world’s most important Lewis Carroll collections (including his own copy of the ﬁrst edition of Alice in Wonderland),  Bram Stoker’s autograph notes and outlines for Dracula; the manuscripts of two-thirds of Joseph Conrad’s literary works, including Lord Jim, a royal proclamation from James II, art, furniture, and even the entire Greenwich Village living room of modernist poet Marianne Moore.

But, back to the hands-on tour… the tour theme varies weekly (founding fathers, women poets, gay lives, Dracula).  Our topic was “Villa Diodati – the Summer of Monsters,” focusing on the creation of Mary Shelley’s Frankenstein. This is one of the greatest soap operas in literature – incest, illegitimate children, suicide, volcanic eruptions, recreational drugs, vampires and (if you include Mary’s parents) women’s rights, free love, anarchy and the French Revolution… and Byron’s daughter went on to write the world’s first computer program.  On the tour, we got to handle (no gloves, just wash your hands before the tour!) a letter by Mary, a first edition of Frankenstein, books with inscriptions by Byron and Percy, and lots of other things I can’t remember – along with great commentary from our guide. 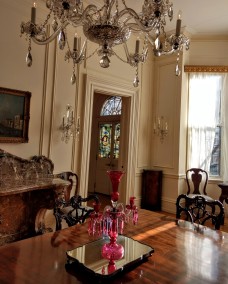 If you can’t make a Hands-on tour, you can still visit the library and see many of the works during the house tour offered hourly with admission.  The museum also runs special exhibits.  The current exhibit (2/18-10/18) is on creative couples in art and history.  The previous exhibition was on the science behind Frankenstein and Dracula:

If you’ve ever wondered what is behind the brick walls blocking views into row home’s back lots, make time to explore the back garden (free with admission).  The museum used its Covid closure time to renovate the space, which had been unused for decades.  Read the guides posted on the website to relate plants in the garden with authors represented in the museum’s collection.

Addendum: Loved the first program so much, we went back for a second Hand’s On History tour in August 2018 – this time on the Founding Fathers. Highlights included: an original printing of Franklin’s Poor Richard’s Almanac, handwritten letters from Adams, Washington and Jefferson, as well as this list (written by Jefferson) of slaves living on one of his plantations. 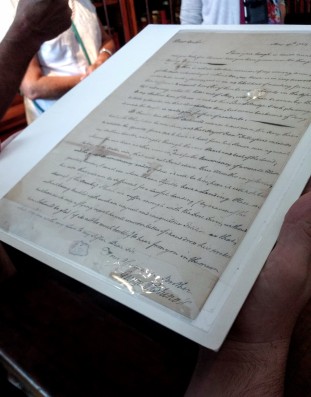 Field Trips: They offer inexpensive field trips for small school groups that can be customized to your area of study.  We did a class on the modernist poet Marianne Moore (they have her entire Greenwich village living room on display) that was terrific. Through examining Moore’s original drafts, the kids discussed how poets generate ideas and looked at the editing process.

2 thoughts on “Hands-on History at The Rosenbach Library (Frankenstein, The Founding Fathers, and much more)”