Although President William Harrison claimed “his fame will last as long as liberty remains upon the earth,” most Americans have no clue who Thaddeus Koscuiszko was (or how to pronounce his name… it’s kos – CHOOS – ko).

This site near Independence Park (which holds the honor of the smallest park in the national park system) isn’t too impressive, but Koscuiszko’s story is. Koscuiszko was one of a group of inspirational (? crazy) enlightenment men, who so believed in the ideals of freedom that they left their own countries to fight for independence in America – mostly paying their own way and working as “volunteers” (the group also includes the more well-known French Marquis de Lafayette,  and fellow Pole Casimir Pulaski).  Koscuiszko was one of the first foreign officers to offer his service to the Continental Army, where he served as Colonel of engineers.  He was a brilliant engineer, given much credit for the defeat of the British at the Battle of Saratoga – which was a turning point in the war (he chose the location and designed the American defenses). He was also responsible for redesigning and fortifying West Point.  He then headed south with General Nathanael Greene, where he continued his engineering work and commanded troops (he was bayoneted in the buttocks during an attempt to take a British fort).

After the war, Koscuiszko returned home to fight for Polish independence from Russia and Prussia.  While acting as Commander of the Polish–Lithuanian forces, he was captured and imprisoned in St. Petersburg.  After this release, Koscuiszko returned to the United States to collect the back pay owed to him (he had not been paid for his 7 years of service in the Continental Army).  During this time, he stayed in the boarding house that is today the National Park site and renewed his friendship with Thomas Jefferson (who called him “as pure a son of liberty as I have ever known”).  He later returned to Europe and continued to work for the cause of Polish freedom.  In his American will, Kościuszko instructed his executor, Thomas Jefferson, to use his money be used to buy the freedom of black slaves (including Jefferson’s).  Later wills superseded this one, so these wishes were never carried out.  Koscuiszko also attempted to free the serfs from his land in Russia-controlled Poland, but was overruled by the Czar.  He died in Switzerland in 1817.

As I mentioned, the park site isn’t too impressive.  They have lots of information panels, a short video, and a re-creation of the room where he stayed.  Still, it’s a great way to learn about this foreigner who was so instrumental in the winning of the American Revolution. 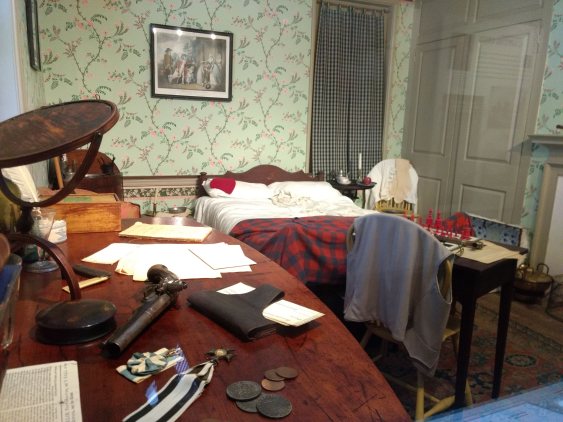