The Pine Barrens have been industrialized since Europeans first settled the area.  One of the best places to appreciate this is the old company town of Batsto. Opened in 1766,  the Batsto Ironworks created the first major industry in the area using the plentiful natural resources: water (dammed to power the mills), bog iron (created as the acidic pine water dissolved iron in the rocks, which precipitated out along the river banks and was collected in barges), trees (to make the charcoal used to heat the furnaces), and oyster shells (for flux, used to purify the iron). 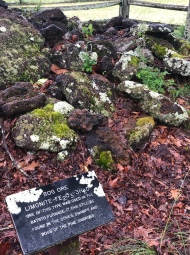 Open for 82 years, the ironworks manufactured a wide variety of consumer products, including 4 monogrammed firebacks purchased by George Washington (still on view at Mount Vernon).  They also produced a large number of the munitions that were used by the Continental Army during the Revolutionary War. 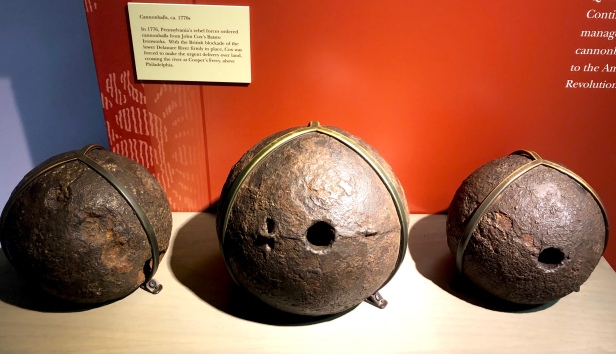 By the mid-1800’s, the discovery of coal and better quality iron shifted iron production to Western Pennsylvania, and Batsto switched to glass manufacturing – again using the plentiful natural resources of the pine barrens (sand!). Known for their production of window glass, the glass works remained in operation until 1867.

At the height of Batsto’s prosperity in the mid-1800’s, as many as 374 people lived in the company village surrounding the factories, along with a company store, grist mill, lumber mill, church, and school.  Like many company towns, workers were paid only in company script, which was accepted only in the company store.  In 1867, high prices at the store caused workers to go on strike, demanding payments in cash. 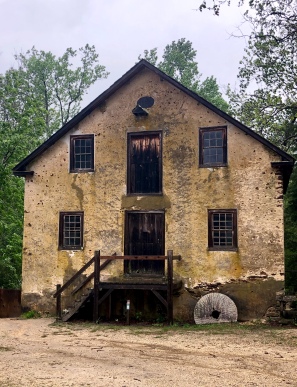 18 restored homes remain visible in the park, along with the grist mill, store, lumber mill and several other buildings, including the owner’s mansion: 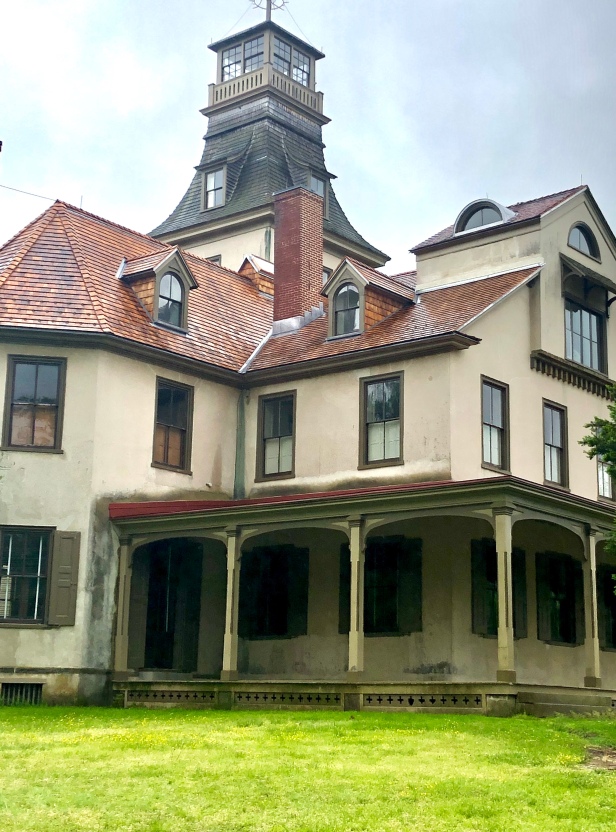 Originally constructed in the late 1700’s, the mansion was renovated in the late 1800’s by Joseph Wharton (co-owner of Bethlehem Steel and namesake of Penn’s Wharton School of Business).  Wharton purchased the land after the glass-works went bankrupt, renovating many of the structures and focusing on forestry and agriculture (he also had an ambitious plan to sell Pineland’s water to Philadelphia). You can view the interior of the mansion on weekend tours. The Whartons were Quakers, so at first glance, the mansion’s interior is fairly plain, but closer inspection shows some interesting (rich people) details, like the beautiful woodwork, warming kitchen (with wood stove and copper sink), bathrooms –  one with shower and another with a zinc bathtub (Wharton installed an indoor plumbing system – using a 12,000 gallon water tank housed in the tower). Many of the furnishings on display were owned by the original Richards family or Wharton family – including a gorgeous federal carved bed in one of the upstairs bedrooms.  Unfortunately, photos aren’t allowed in the building, but I couldn’t resist sneaking a photo of my favorite detail in the house:

After Joseph Wharton’s death, the property was managed by a Philadelphia trust, and eventually purchased by the state.  The last resident moved out in 1989. In addition to the remaining buildings, there is also a visitor center (open year round) with interesting displays of the history of Batsto and the environment, and a nature center (open summer) with additional displays of local flora and fauna.  Numerous hiking trails branch off from the parking area. If you are in the area in late May/early June be sure to look for New Jersey’s most spectacular wild orchid, the Pink Lady’s Slipper. Native to the pine barrens, these orchids prefer dry, sandy, partly shaded areas and rely on special fungi to help provide nutrients lacking in the poor soil.

Another method of getting nutrients from poor soil is by being carnivorous, and the pine barrens are home to several carnivorous plants, including pitcher plants and sundews. If you are lucky and keep your eyes open, you can often spot these in the marshy area on the orange trail.

No visit to the area is complete without a lunch stop in nearby Hammonton.  This town is home to a vibrant main street, an active arts community (including the wonderful Eagle Theater), and loads of Mexican restaurants.  There are many choices, but our go-to for the past 20 years has always been “Fiesta Mexicana.” There are certainly more authentic spots (although there is always a large Latino clientele here), but I love their yummy Aztec (tortilla) soup, and they always have tamales (most other places serve them only on weekends). Plus, their salsas are yummy, too (the red one is SPICY!).

Passing mile after mile of blueberry fields on the drive from Batsto to Hammonton (“The Blueberry Capital of the World”) gives a sense of why New Jersey is nicknamed “The Garden State.” New Jersey is the 5th highest producing blueberry state in the U.S. (and 3rd in cranberry production).

A stop for ice cream at Royal Crown is required, especially during blueberry season, when they make several kinds of Hammonton blueberry ice cream. We always get Fred’s birthday cake here. (they also have a flavor called “Gummy bear beach party,” which has to be the best ice cream name ever.

Field Trips: Batsto offers (free) field trips throughout the year covering the history and natural history of the site.

P.S. There are many other old, abandoned towns located throughout the pine barrens. Most of these are totally abandoned, located far off the beaten path (Google for locations).  One that’s been restored and is well worth visiting is Whitesbog, another company town and farm with 25 historic buildings, blueberry fields, cranberry bogs and hiking trails.  It was here in the early 1900’s that Elizabeth White collaborated with the U.S. Department of Agriculture to develop the first cultivated blueberries. Run by a non-profit, they host lots of events year round, including Tundra Swan tours in the winter.