Anti-immigrant sentiments are certainly not new to the U.S., and The City of Brotherly Love, with all its history of religious tolerance (The Colonial (Georgian) Churches of Philadelphia), is no exception.  The architecture of Sts. Peter & Paul is one of the best places to see its impact.  Although not obvious at first glance, a second will show no windows on the ground level of this cathedral (low level windows are recent additions).  The cathedral was begun in 1846, shortly after  Philadelphia’s Nativist Riots. During these deadly anti-Catholic/Irish/Immigrant riots, several Catholic buildings, including St. Augustine (located on 4th Street), were attacked and burned.  The Cathedral Basilica was built with windows high enough to prevent stones from being thrown through the windows (the lower windows visible today are additions to the original building).

Today the church is a lovely place to spend a few quiet minutes enjoying the architecture and a bit of Philadelphia history.  Located in the heart of the museum district (at the opposite end of the Ben Franklin Parkway from the Art Museum), the building is the largest Catholic church in Pennsylvania. It has been the site of two papal Masses, by Pope John Paul II (1979) and Pope Francis (2015), and was visited by Mother Theresa during the 41st International Eucharistic Congress.  It is also home to the shrine of the first American born saint, Philadelphian Saint Katharine Mary Drexel. The interior decorations are largely the work of Constantino Brumidi, who also painted the Capitol Building in Washington, DC. 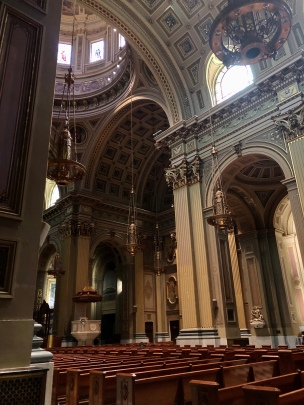 I really liked the 1975 mural depicting people and events linking the Church’s involvement with Pennsylvania history. Included are: George Washington and members of the Continental Congress at Old Saint Mary’s Church, Saint Katharine Drexel caring for the wounded on the Gettysburg battlefield, a silhouette of artist, Thomas Eakins, on a bicycle (although not Catholic, he and a friend would bicycle to St. Charles Borromeo Seminary where they would attend vespers and enjoy conversation with the priest-professors – Eakins also painted several of these priests), and Saint Michael’s and Saint Augustine’s churches, burned and rebuilt during the Nativist riots. 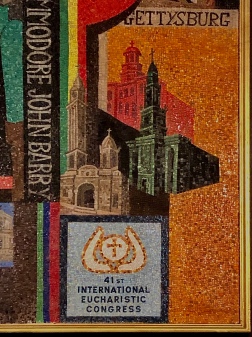 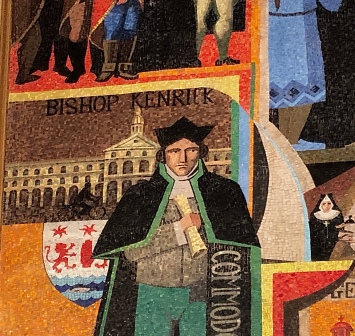 The cathedral is open to visitors daily for self touring (free).  A self-guided tour and 20 minute audio tour are available on the website, which give the history of the church and explain some of the art works.  Free guided tours are offered on Sundays following the 11:00 mass.