This is another of Philly’s small, secret museums – full of little known, interesting history. This time, it’s the story of Richard Allen, one of the early leaders of the nation’s black community. Born into slavery, Allen was the founder and first bishop of the African Methodist Episcopal church. At 17, Allen joined the Methodist church. Shortly after, his owner also converted, and, convinced that slave owners would not be allowed into Heaven, allowed Allen to purchase his freedom. Allen then traveled the mid-Atlantic, preaching the Methodist gospel – ending up in Baltimore at the historic meeting where the Methodist church officially broke from the Church of England, becoming its own denomination. He returned to Philadelphia, where he was allowed to preach (although only the 5am service) at St. George’s – one of the nation’s first Methodist churches. Along with Absolom Jones (who later became the nation’s first black Episcopalian priest), Allen led the black congregants from the church to protest increasing segregation within the church. This move eventually led to the formation of the AME church. In addition to his church activities, Allen was active in the abolition movement (his home and church were stops along the underground railroad), central in organizing the black community’s public service efforts during the horrific Yellow Fever epidemic of 1793, and a key figure in the fight against the African Colonization Society (an organization established with the intent to return African-Americans to Africa).

The Richard Allen Museum is housed in the basement of the Mother Bethel AME Church, which stands on the oldest parcel of land continuously owned by African-Americans, and is the site of the first AME church. Although that original church (a blacksmith shop dragged to the site in 1791) is long gone, today’s church (the 4th on the site) is a beautiful late-Victorian design (c. 1889). Even after Allen’s death, the church continued to play an important part in the black community, hosting speakers such as local abolitionist Lucretia Mott and Frederick Douglass (who spoke here in 1863 while on a tour to recruit blacks into the Union Army). The museum is open Tuesday-Saturday from 10:00-3:00 (and after services on Sunday). Ring the bell at the side door and a docent will lead you on a tour of the museum, where you can learn Richard Allen’s story, visit his remains in the crypt, and see artifacts from the early church (including Allen’s Bible and his wife’s ledger book, used to record rent income). 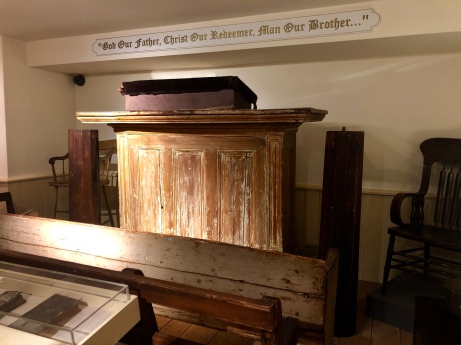 The tour finishes up in the sanctuary, with its gorgeous stained glass windows and wood-beamed ceiling. Free.