The lavishly decorated rooms in the Ebenezer Maxwell Mansion (Philly’s only authentically restored Victorian museum and garden) are an atmospheric setting for Victorian Theater. Most productions (including occasional musical evenings played on the gorgeous piano), take place in the drawing room.  Since the museum is actually more of a large house than a mansion (staff thought “Maxwell House” sounded a bit too coffee commercialish),  performances are intimate – usually only 25-30 seats. 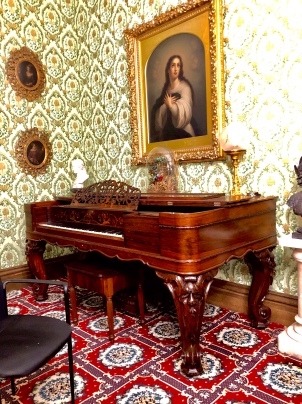 Past highlights include the biggies of the Victorian-era – Dickens, Ibsen, Sherlock Holmes, Dracula, Little Women, Anne of Green Gables, etc.. We were lucky enough to see a one man show of an adaptation of Wilde’s “The Picture of Dorian Gray.” (2019) Every October the museum hosts Victorian murder mysteries – like the Sweeney Todd inspired version we attended in 2017.  Amazingly, one of us (Fred) actually correctly identified the murderer (the understudy, who was having an affair with the leading man!). In addition to theater, the museum also presents Victorian inspired workshops, lectures, and a book club. 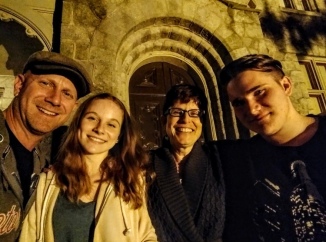 The house is open for guided tours Thursday-Saturday at 12:15, 1:15, 2:15 and 3:15.  Rooms on the first floor (including the kitchen (with its coal stove and copper hot water boiler), dining room and parlor) are interpreted to the 1860s.  The servants’ bell-pull system is still visible in the kitchen, something I’ve read in a lot of stories, but the first I’ve ever actually seen. 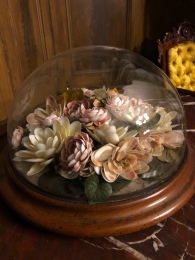 I also love these Victorian glass dome arrangements. The upstairs is interpreted to the 1880s, just after Philadelphia’s Centennial exhibition.  Highlights of the second floor include several examples of  Victorian hair-art and the painted and stenciled Egyptian revival wall decoration (they left a section of the original decoration in place, this photo is of the restored section).

The gardens surrounding the mansion have been created to be historically accurate, using garden design books from the 1840s and 1870s. Information about the design books and gardens can be found on the museum’s website https://ebenezermaxwellmansion.org/the-gardens/.

The house is located in the Tulpehocken Station Historic District. As downtown Philadelphia became more crowded and dirty, the upper-middle class began heading out.  Fueled by the development of a commuter rail line, this area was one of the first residential enclaves away from downtown. Large suburban houses were built in the area from about 1850 to 1900 in a variety of Victorian styles. You can view many of these original homes on a  walk around the Maxwell Mansion.

2 thoughts on “Victorian Theater in a Victorian Mansion”