Definitely a bit off the beaten path, Fort Mifflin has a little something for everyone – great history, ghosts, airplanes, and turtles.

Begun in 1771 for protection from the French, it was completed in 1776 by Americans (led by Ben Franklin) who hoped to use it to keep Philadelphia out of British hands.  While ultimately unsuccessful (the British took Philadelphia by land), the fort had its moment of glory in 1777 as the 400 troops stationed inside held off  British supply ships long enough for Congress to flee the city and for Washington to get his troops away from Philadelphia and into winter quarters in Valley Forge. The American troops refused to surrender, instead setting fire to the fort and escaping to Fort Mercer, their sister fort on the other side of the Delaware River. Although it never again saw combat, the fort remained active and was used to house prisoners during the Civil War (including troops captured during the Battle of Gettysburg), and to hold armaments through WWII (when anti-aircraft guns were housed here to protect the Philadelphia Naval Yards).  The last troops left the fort in 1954, and it was declared a National Historic Landmark in 1970.

Today the fort is a mishmash of original fortifications (the stone walls) with 18th, 19th and 20th century additions.  Although not large, there is plenty to fill an hour.  Occasional tours are offered, but most visitors explore on their own.

The fortifications were restored during John Adam’s presidency: 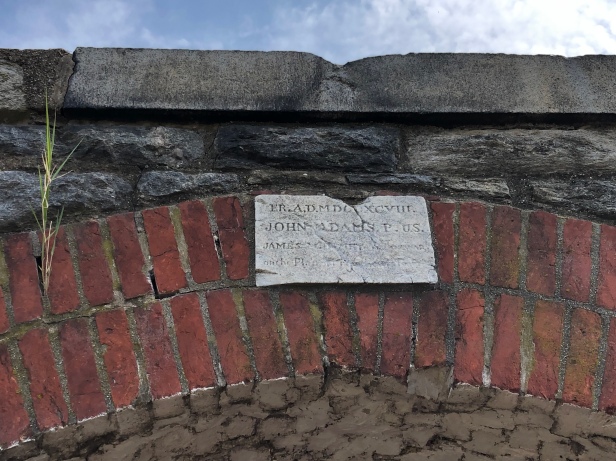 Casement 11, recently re-discovered and excavated in 2006, was used to house Civil War prisoners in solitary confinement is fun and spooky to explore: 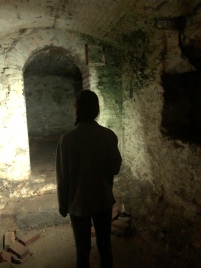 The old barracks contain a small museum with information about the fort’s history, river defenses and a few artifacts: 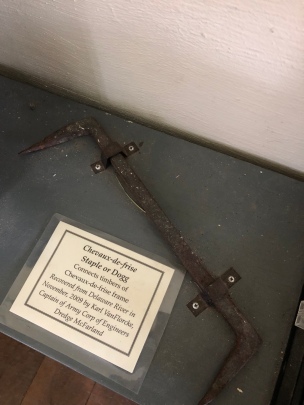 The torpedo casement was built in 1876 to shoot torpedoes into the Delaware.  The torpedoes were fired from a pool in the floor of the casement, sent through a tunnel under the ramparts, through a channel in the moat, through a tube in the riverbank, and finally into the Delaware River. Apparently, this type of torpedo was powered by carbon dioxide created by mixing baking soda and vinegar – just like those little toys we used to get in cereal boxes??!!

You can still walk around the fort along the ramparts (note: the walls are about 12 feet high and there are no railings):

The fort is right on the flight path to Philly International Airport.  All day, at intervals of 3-5 minutes), jets pass over right above your head:

From the walls above the moat, you can get a great view down on the amazing number of turtles that live in the moat, including at least one VERY large snapper (you get no size perspective with this photo… it must have been at least 3 feet long!!):

Because parts of the fort grounds are still used by the Army Corps of Engineers, Fort Mifflin has the distinction of being the oldest active military base in the U.S..

The fort is open Wednesday-Sunday, March-December. The site offers programming year-round, including Halloween ghost tours, paranormal tours (the fort is supposedly one of the most haunted places in the US), military reenactments and field trips for school groups of all ages (for an extra $40, they will do a cannon firing). $8/adult $4/child

Tip: There is a nice picnic area on the grounds.

Tobey says: We visited on a beautiful day and it was fun to walk on the walls and see the airplanes and turtles.